Helford River Gig Club are delighted to be hosting their annual Head of the River Race this October. Please find below more information about the event and who to contact to secure your space in the competition.

Further information and signing up

Spectators welcome - see details above for catering at Ferryboat beach.

If there is enough interest, there may be a spectator's boat following the Juniors and also watching the finish. Contact Ian at ian@helford-river-boats.co.uk for more info. 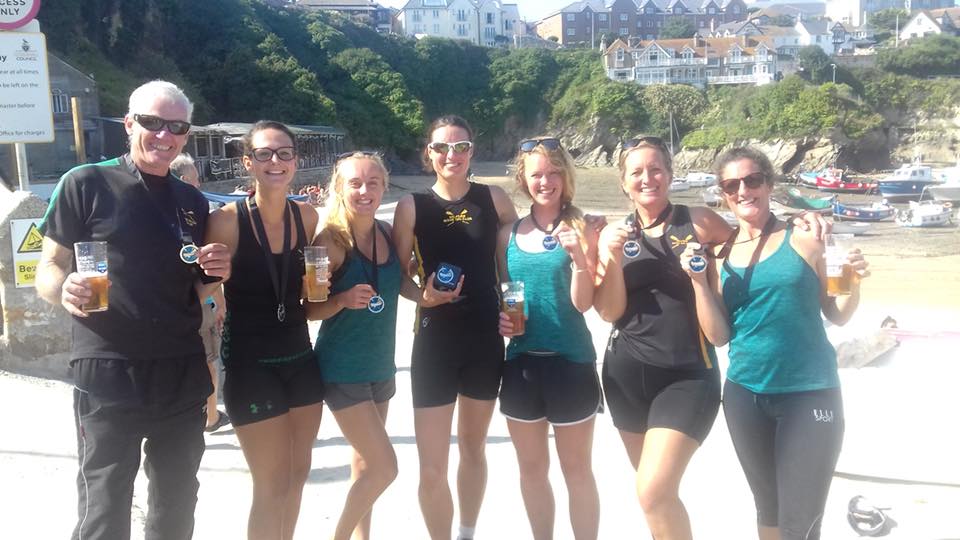 It's been another successful year at the Newquay County Championships for Helford River Gig Club! Congratulations to all rowers who took part, we're incredibly proud.

Roll on the Men's Newquay Championships in a couple of weeks time! 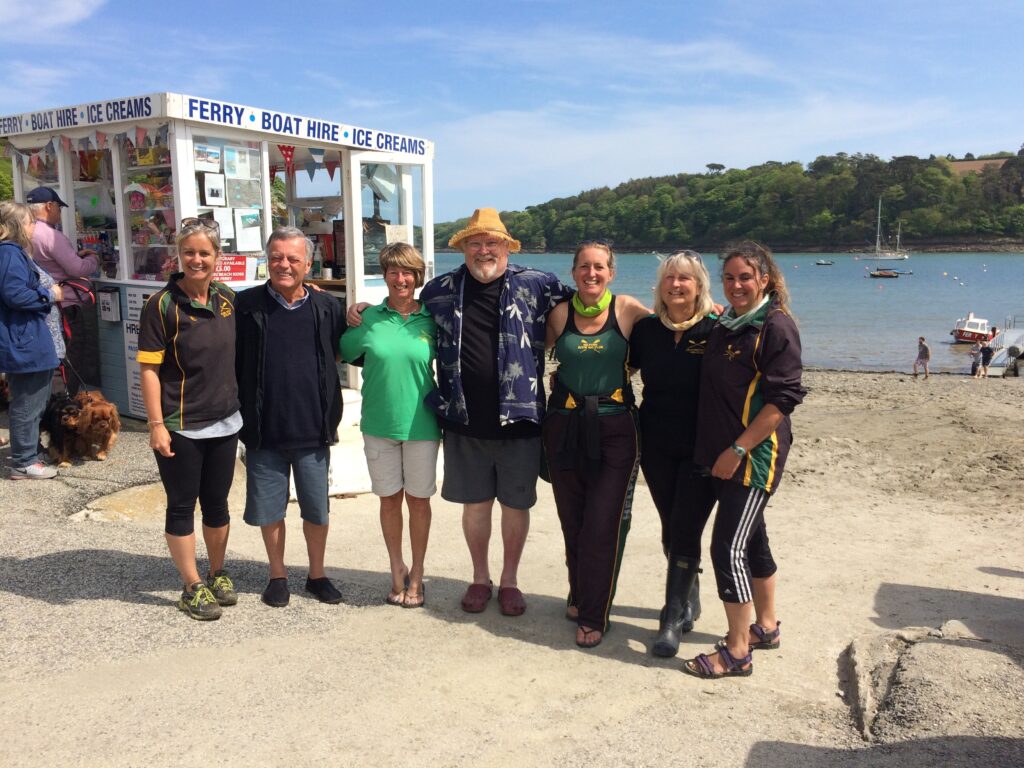 Helford River Gig Club hosted a very special visit recently. Familiar faces from British television, radio, stage and screen popped down to Pedn Billy beach to give gig rowing a go. Keep your eyes peeled during this week's episode of Celebrity 5 Go Caravanning to catch the Helford crews in action! Also featuring our friends from Mevagissey, who do you think will win the race?

Celebrity 5 Go Caravanning airs on Channel 5 at 8pm on Friday 3rd August 2018. Episodes are also available via catch up on My5. 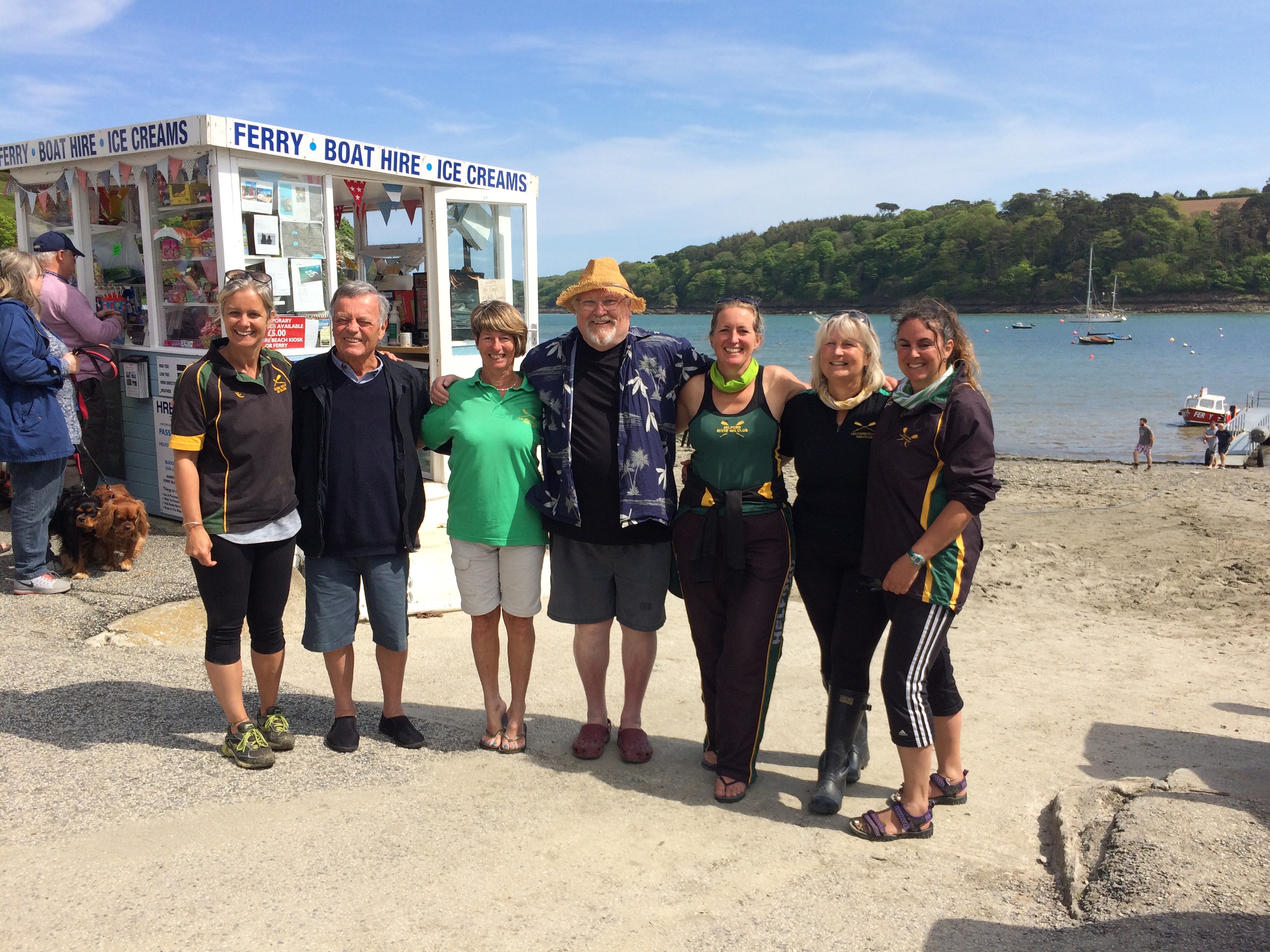 We've organised a few social events for the summer. From Family Fun Days, to Club Nights and Post Scillies Celebrations. We'd love to see as many of you there, so be sure to jot these dates down in your diary!

Club night will include; Lots of giggles, a bit of rowing and more socialising, which I know Helford is very good at! A BBQ may also happen if the weather is good. The invite is going out to the WHOLE club; Ladies, men's and juniors. New and experienced rowers are all welcome. We also please ask that every rower who attends on the night pays £1 to allow us to hold our event on Pedn Billy beach. This is a private beach which the Bligh’s have kindly allowed us to use so please bring those £1 coins!!!

Club night will include; Lots of giggles, a bit of rowing and more socialising, which I know Helford is very good at! A BBQ may also happen if the weather is good. The invite is going out to the WHOLE club; Ladies, men's and juniors. New and experienced rowers are all welcome. We also please ask that every rower who attends on the night pays £1 to allow us to hold our event on Pedn Billy beach. This is a private beach which the Bligh’s have kindly allowed us to use so please bring those £1 coins!!!

Well done to all who took part, some impressive results all round!

HRGC member Simon Walker is rowing the World Pilot Gig Championships this year to raise money for The Royal Cornwall Hospitals Clinical Oncology and Cancer Care Appeal. If you'd like to sponsor Simon, you can donate via his JustGiving page.

"I started rowing Cornish Pilot Gigs with the Helford River Gig Club in 1994, aged 45. I have been fortunate to have raced in all of the  senior male categories from Mens A onwards and 13 years later in 2007, the Gig rowing crew who I row with started the SuperVets category at the World Pilot Gig Rowing Championships in the Isles of Scilly. We officially rowed in the Veterans class but unofficially we raced with four other crews as SuperVets, that is all rowers who were over 50 years old. We continued racing annually within the Veterans category but for the SuperVets Trophy against a growing number of SuperVets crews  and in 2012 the SuperVets class was accepted as an official group.

In August 2016 I was diagnosed with Prostate Cancer. I was fortunate that whilst it had spread, it had not got into my glands or bones but what a shock. It was interesting to find out at a meeting with 11 other sufferers, that none of us had been diagnosed in the same way and none of our treatments were the same. Extraordinary!

My rowing crew, keen to keep racing and urge me on to think of other things apart from my troubles, suggested we should start a new category at The World Pilot Gig Rowing Championships at the Isles of Scilly on May 4th 2018 - A "Vintage" category, for all crews over 60 years old. (Some rowers of course will be over 70!)

My treatment is ongoing and I hope it will cease in September 2019. I have had internal and external Radiation and ongoing Hormone treatment. The latter reduces muscle and causes tiredness sometimes making training awkward and difficult. There are other side effects to my treatment which I'd rather not talk about.

Never the less my family and friends have been amazing and as for my rowing mates...well the less said about them, the better! And, we as a crew, just ask that you sponsor me, in my 70th year, to take part in the Championships."

Donating through JustGiving is simple, fast and totally secure. Your details are safe with JustGiving - they'll never sell them on or send unwanted emails. Once you donate, they'll send your money directly to the charity. So it's the most efficient way to donate - saving time and cutting costs for the charity. 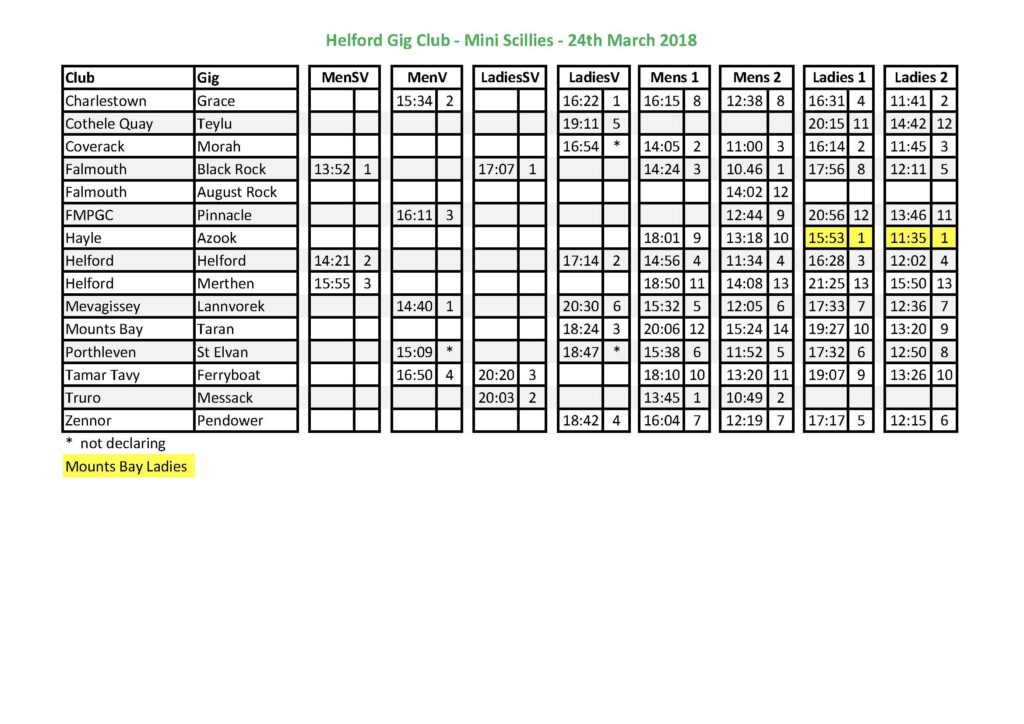 Well done to everyone who took part in this year's Mini Scillies. The final results are below. A huge thank you to everybody behind the scenes who were involved in organising the day. 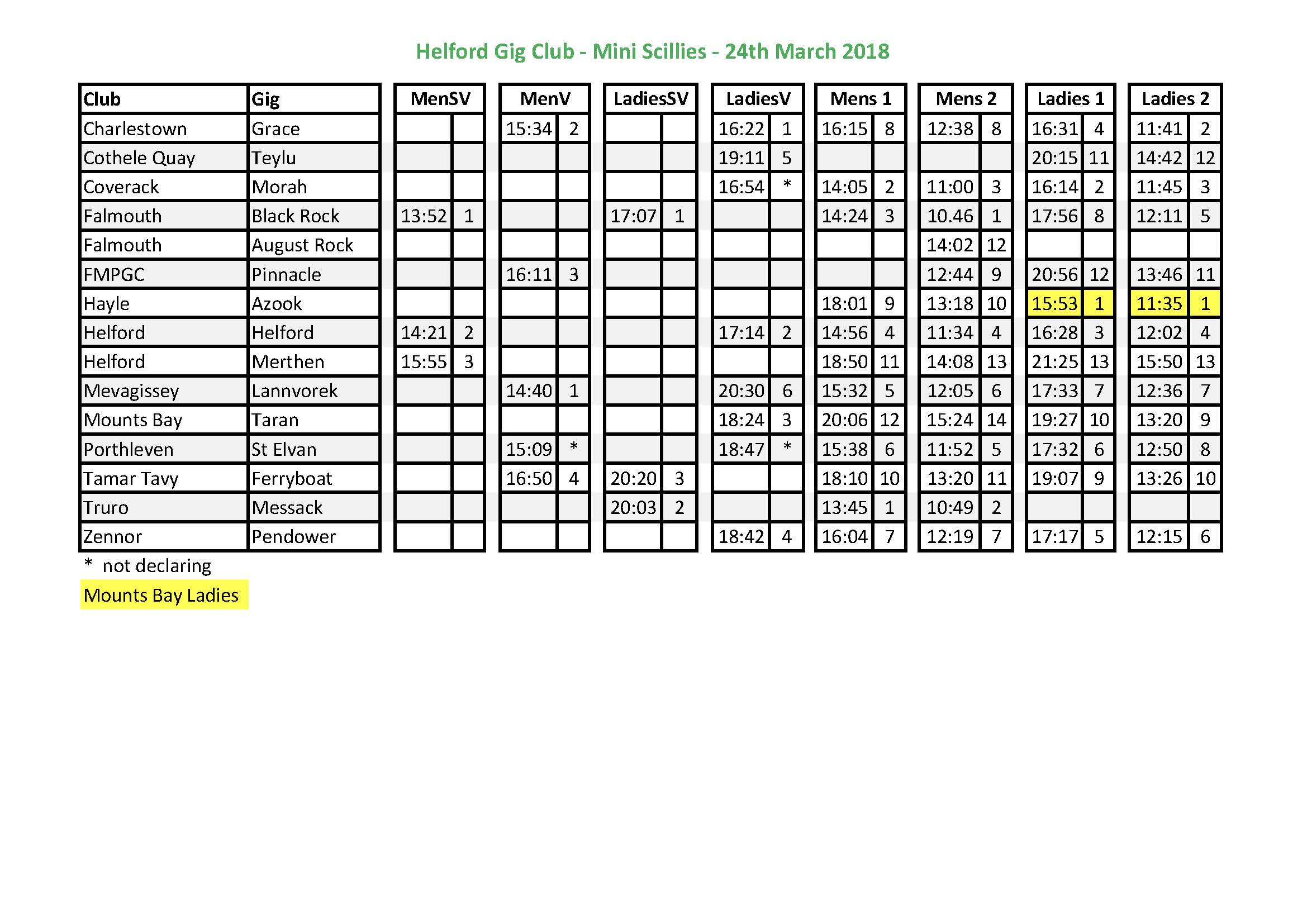 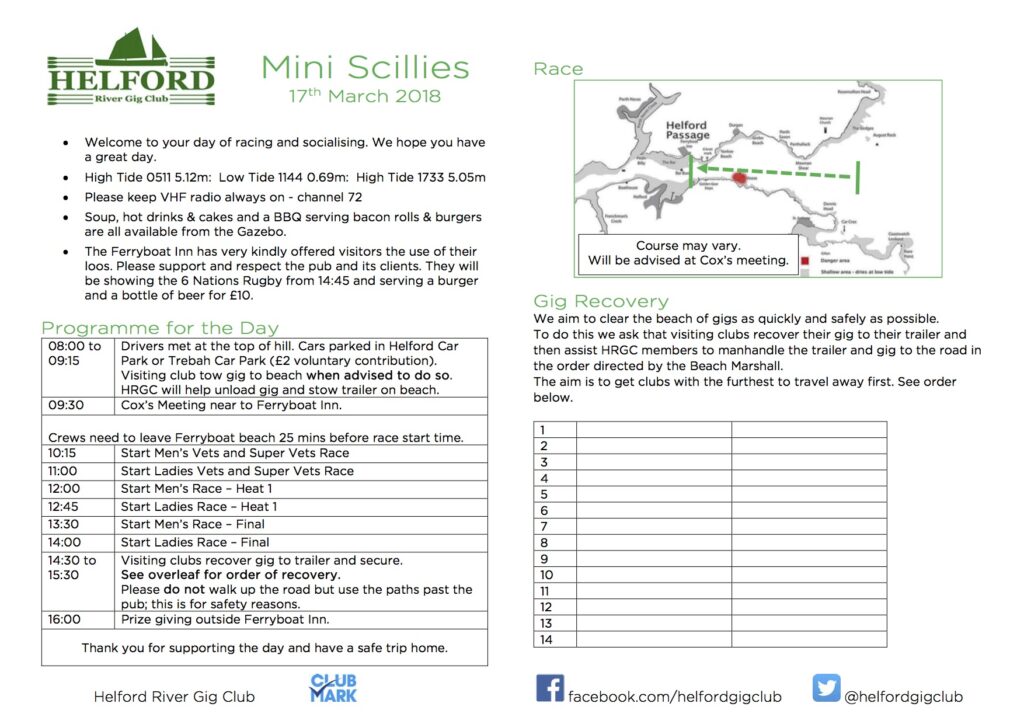 Helford is holding its Mini Scillies event on Saturday 24th March. Please see information about the day below and on the attached document.
High Tide 0947 4.62m: Low Tide 1622 1.40m:
Soup, hot drinks & cakes and a BBQ serving bacon rolls & burgers are all available from the Gazebo from about 1100
The Ferryboat Inn has very kindly offered visitors the use of their loos. Please support and respect the pub and its clients. They will be serving a burger and a bottle of beer for £10 from 17:00.
Programme for the Day 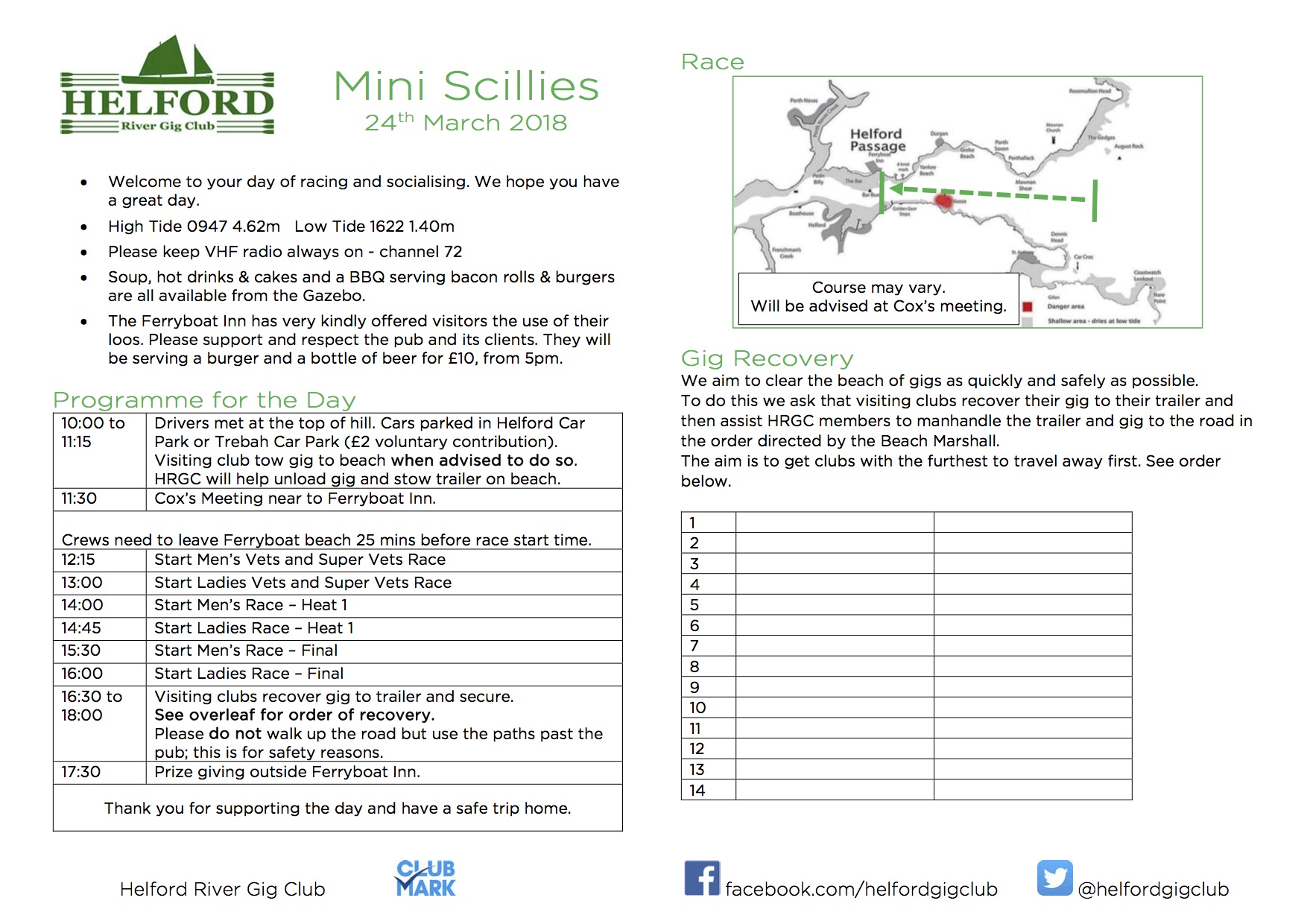 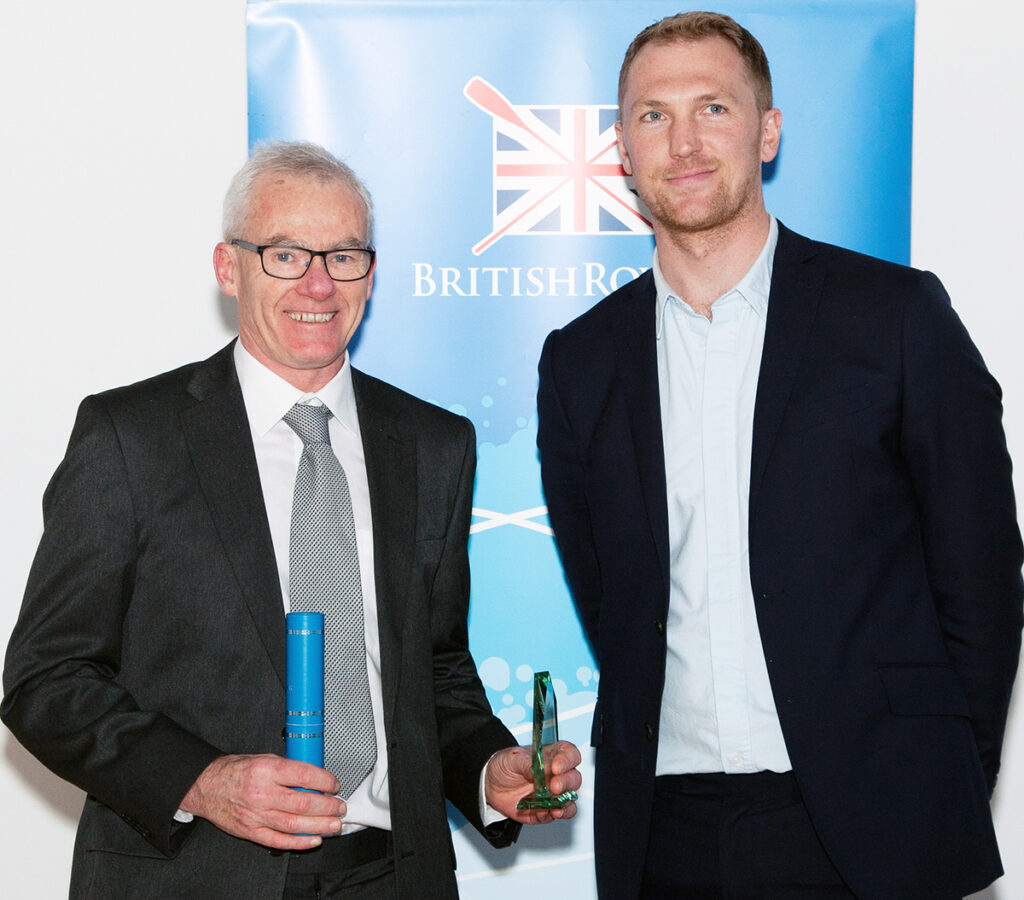 Gig-rowing world champion and stalwart of the Helford River Gig Club, Dave Merrick has won British Rowing’s Lifetime Achievement Award. It was presented to him at a special lunch for all the coach and volunteer award winners at the River and Rowing Museum in Henley-on-Thames on Saturday 3rd February. 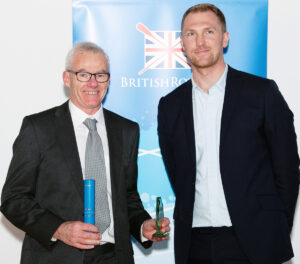 Dave was nominated in secret by fellow club members, who with others close to the club, pulled together and submitted a grand total of 14 testimonials to support his nomination. The news that he had won the award for the West of England region came just before Christmas and was celebrated in true Helford style…in the Ferryboat Inn pub at Helford Passage, where the club rows from. It was then at the lunch last Saturday that he found out he was the overall winner.

The awards, which celebrate and recognise the significant contribution that volunteers and coaches make to rowing were presented by British Rowing Chairman, Annamarie Phelps CBE and double Olympic champion Alex Gregory MBE. Phelps said: “It is a privilege and an honour to be able to recognise the hard work, dedication and passion of these amazing volunteers and coaches.
Without them, and the tireless work of so many others, rowing would not be able to thrive across the country. The calibre of nominations this year was extremely high showing the strength of volunteering in rowing.”
According to British Rowing, the award would be presented to ‘an exceptional candidate to recognise his or her achievements through a lifetime dedication to the sport’. With almost 30 years under his belt, and well over 10 hours a week given to the club, Dave, 62 is a current Supervets World Champion, having won four times and been runner up twice in the last six years. He has also coached winning U14 and U16 junior crews and seen podium success with adult crews at the world championships. He is chief coach and selector, Treasurer, and General Committee Member, and was instrumental in gaining CLUBMARK accreditation for the club. He is also the club’s CPGA and British Rowing representative. Dave selflessly commits so much of his time to ensure rowers are safe, fit and healthy with opportunities for those that want to compete as well as those that want to row for fun. His charity has also extended beyond the club in fundraising and other community and youth activities, such as accompanying a young crew on a very challenging row from Cornwall to the Scillies to raise money for Cornwall Hospice Care.

Says Dave of this special recognition, "I am really proud to have won this award from British Rowing; but more so for Helford and the sport of gig rowing rather than for myself." Club Chair, Christine Winans added: “He is undeniably one of the greatest local ambassadors for gig rowing, and we are extremely lucky and proud to have him as a member of Helford River Gig Club.”

Through the example set by Dave, Helford River Gig Club, one of the oldest gig clubs, embraces all the values of the sport of rowing. It is a truly inclusive club with something for everyone, whatever the age, gender or ability.

For more information on Helford River Gig Club, visit www.hrgc.co.uk or email newrowers@hrgc.co.uk if you’d like to have a go at gig rowing.

All members are warmly invited and encouraged to attend the AGM on Wednesday 24 January, at 6pm for a prompt 6.30pm start, at the club house (Chapel Hill, Gweek, TR12 7AE).

The agenda and papers will be emailed to all members in advance. If you haven't received your copy or for more information, please contact the Secretary, Nic Wilson, at nic.thegarth@gmail.com.

And if you need a bit of pasty power to see you through the meeting, please contact Nic in advance to place your order.

Don your tartan and celebrate our traditional (well, almost) Burns Night at the club house on Saturday 27 January.

For the amazing price of only £10 you will be treated to:

If you are fond of a wee dram, for a small extra charge, you can pit yourself against lesser palates in the Whisky Tasting Challenge, "A Whisky Tour of Scotland", supplied by Constantine Stores.

And finally we can almost certainly promise you at least one drunken rower declaiming a verse or two of Rabbie's finest in their best Scottish accent - it wouldn't be a Burns Night otherwise!

For tickets, please contact Heather on stripeyramb@gmail.com, or speak to Franziska, Hattie, Lauren, Heather or Philippa.

Congratulations to the crew of Dartmouth's Smudger for being the fastest gig in our Head of the River Race yesterday. Torridge's Will To Win was second and Helford's Helford was third. See the full results for gigs.

The start was staggered, based on handicaps. The times of crossing the finish line for all boats, ie gigs, flashboats and skiffs, are listed here.

Thank you to all clubs who joined us this year in somewhat unpleasant conditions. We look forward to welcoming you again next year when we hope the sun will shine! Finally, thank you to the organisers, Steve and Jo, and all other volunteers, for the smooth running of the event.