The list of clubs competing in our Mini-Scillies event this Saturday is now available at hrgc.co.uk/helford_events/

For other information about the event, see the previous posts.

Weather forecasts for Saturday are currently improving - but keep a look out here and on Twitter and Facebook on Friday evening in case we do have to cancel.

We look forward to seeing you!

If you are competing or watching our Mini-Scillies event on Saturday 27th February, here's some more useful information:

Timings - see previous post for the day's programme. The list of competing clubs/boats will be posted shortly.

Weather/ cancellation - if forecasts are poor, any decision to cancel the event will be taken on Friday 26th February at 11am and posted on this website and via Twitter and Facebook. Competing clubs will also be informed.

Parking - this is very limited so please car share if you possibly can. Stewards will be on hand to direct competitors to the available parking. If you are able to arrive by an alternative means of transport (boat, bike, bus, feet etc) that would be even better!

Refreshments - a tea stall and barbeque can be found just along the road from the beach. The tea stall will be serving teas, coffees, homemade soups (with rolls) and homemade cakes, with bacon baps and burgers available from the barbeque.

Spectators - racing starts at 11.30am with the final race at 3.30pm. The boats will race from the mouth of the river, with the finish line at Ferryboat beach.

We respectfully ask all those attending this event not to use the pub tables unless you are patrons of the pub and also not to leave any rubbish behind you at the end of the event. 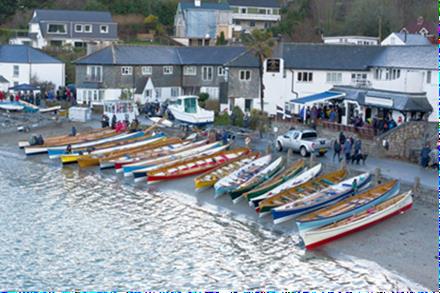 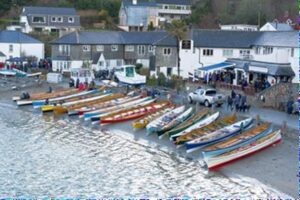 This event is now full, including the waiting list.

Details of the crews competing will be available shortly.

The Helford River Gig Club head-quarters is located in Gweek. It is a great place to hire for an event. It has two large function rooms which can accommodate 140 people, a bar, a fully equipped kitchen, ample parking, and a large field. We have hosted meetings, fitness sessions, parties, weddings and school events.

If you'd like to discuss your requirements, please get in touch with an email: bookings@hrgc.co.uk

You may, or may not know, that a group of wounded veterans are presently building a new gig, which they intend to compete in in the World Pilot Gig Championships in the Isles of Scilly at the end of April, beginning of May.  This build is taking place under the watchful eye of Andrew Nancarrow at the National Maritime Museum.

Before they get to the Scillies they are going to be rowing the gig, and showing off their handiwork, at other local gig clubs on the way.  The first port of call, when they leave Falmouth will be the Helford river.  We would like to give them a special ‘heroes’ welcome by asking as many members as possible to come to the Ferry Boat Inn on Saturday 2nd April 2016.  We are also hoping that our two plastic gigs can be rowed out to meet them and then row with them to the Ferry Boat Inn.  This is all being sponsored by St Austell Brewery who will be laying on refreshments at the Ferry Boat.  We think there is also talk of the Marine Band turning up to welcome them ashore.

The next day, Sunday 3rd April 2016, they will be setting off to row to Coverack. Again, it would be nice to have both our gigs out to row alongside them, and encourage them on their way to their next venue.

Please make a note in your diaries and try and to  be available over this weekend to give them as much support as possible.  Full details of the day's events will follow nearer the time.

How about coming along to Dave's Thursday night circuit sessions down at the Gig Club from 6pm? The perfect way to start 2016.

A huge thank you to all that attended our Head of River Race this year. Despite the challenging sea conditions the day ran smoothly and we had some fantiastic racing. Full results can be found here - HORR RESULTS 2015

Click here to see photos from the day, a big thanks to Louise Danks for these pictures.

Thanks to Christine Winans for the following report:-

On Saturday 10th October a exciting fleet of 34 gigs, 10 flash boats and skiffs, and one Dragon Boat gathered at the Helford Passage for the annual four-mile long ‘Head of The River Race’ (HORR) which is organised by Helford Gig club each October. The event has become more popular each year, and this year proved to be the most exciting yet with clubs travelling to the event from as far away as Bristol and Lyme Regis.

Preparations started early in the day as a mammoth two-hour pre-race operation saw all of the boats moved around to the picturesque Pedn Billy Beach, in order to avoid launching the race into the swells beating onto the beach in front of the Ferry Boat Inn. At 3:00pm the boats were launched in preparation for the start at 3:30pm. The start sequence commenced with the flash boats and skiffs being the first off, followed by the gigs and finally the Exe-Calibre Dragon Boat, all of which had been handicapped on start time according to age, gender and experience of the crews on-board.

The race was dramatic from the start, which was based at the entrance to Port Navas Creek. The main gig fleet raced up the course towards the mouth of the Helford towards the infamous ‘Narrows’ where tide and waves met, creating challenging conditions for the rowers. A sharp turn around a mark saw several gigs clash, oars raised out of the water to clear the other boats as the fleet converged before once more gathering speed down-wind towards the finish line at Gweek. During the 30 to 40-minute row the smaller flash boats and skiffs maintained their lead, their light weight favoured by the easterlies pushing down the river. The main fleet of gigs were in hot pursuit, providing a spectacular sight as battles took place between groups of boats throughout the course, whilst the noise of the Dragon Boat drums sounding increasingly louder as they gained on the main fleet.

Watched by a crowd of supporters at Gweek Quay the first boat to complete the race was skiff number 47 rowed by Tony and Jan Halliday, finishing the course in 32:55mins. The fastest small boat along the course was the flashboat raced by Trelawney Rowing Club completing the race in 29:31. ‘Exe-Calibre’ Dragon Boat stormed down the river in a time of 26:40, and the first gig across the line was Truro in ‘Royal', with the fastest gig being ‘Governor’ from Falmouth gig club in a time of 35:49.

A prize-giving ceremony and a party followed at the Helford River Gig Club in Gweek, provided a fun and relaxing end to the exciting day. Three crews from Helford are now looking forward to competing in the Two Castles Race in Falmouth on the 24th October.

Gigs to be launched as originally planned from Ferry Boat Beach

HORR 2015 is GO GO GO! If the weather changes we will run the event from Gweek, further information will be posted at 5pm tomorrow night

Based on the weather, we're going to make a go/nogo decision on running the Head of the River Race at 5pm on Thursday the 8th Oct. We'll announce the decision here, on Facebook and on Twitter.

If you are coming to the Head of the River Race on Saturday 10th October, then all the details you need are here.

Amazing results for Helford at Newquay.
3rd in the heat and 19th fastest losers with top 18 going through.
Over all 49th position. Well done!